Hi, I’m Adam. I was the counselor in charge of Group ‘Baladi’ (Arabic for ‘my country’) at Al-Bustan Camp. Despite my height and spattering of facial hair, I was pretty much a camper myself. That’s because everything the children did and learned, I did and learned, too. Shoulder to shoulder, we recited Ustadh Yaseen’s Arabic lessons and songs and banged on the Tabla with Ustadh Hafez. We crafted radial designs and herbal concoctions with Ustadha Lisa, told stories with Momma Sandi, Brother Nashid Ali, and Kala. I have to say there’s no better way to learn than by being ten years older than all the other students in the room.

I’m quite versed in the ways of Al-Bustan, being I was actually a camper myself from a young age, both my own and the program’s. As I greet parents dropping their children off in the morning, I realize that I can’t tell them about all the magic that goes down once camp begins. Much of the experiences I’ve had, that I wanted to tell them their children would have, remain unavailable for articulation. But I know. I’ll try to share some of what I know now. 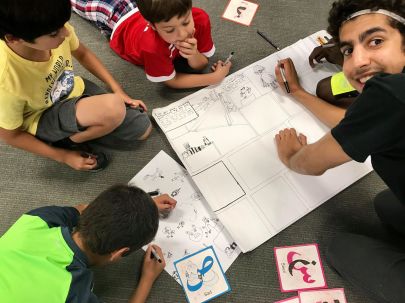 I know what it’s like to sit there and loll my oversized head and then all of a sudden, a teacher has directed me back to Earth where there is Arabic before me. Arabic! Yep, the language that my parents speak at home. The one that I understand but I’m not confident enough to speak. The one that’s responsible for making unpronounceable the names of all those dishes I love but my American friends have never heard of. The one that gave me my name! Masha’Allah! Yes, that one!

Anyway, I know what it’s like in the art room, waiting for Ustadha Lisa to finish her explanation because I’ve already snatched one of the colored pencils from the middle of the table, and this color is mine, and I’m going to make a fish, and I’m so excited, and as soon as it’s time to actually let loose I have no idea what I’m doing because I wasn’t really listening. Yeah. That happens. I always loved art.

I definitely know the drumming circle, the drum that’s too big for my little lap, so it wobbles when I play it. I know how to say “Dum, dum, tik-a-tak, dum, tik-a-tak, tik-a”, and then how to play it, and then how to tell you what that rhythm is called. It’s called baladi. (woah, isn’t that, like, the name of our group?!) I know the impulse to tap, tap, tap that tabla while Ustadh Hafez is talking but I refrain so I don’t miss a beat!

Something we brought back this year is the Dabke. We learned to dance. Sort of. Group Baladi was the absolute unruliest of the three when trying to teach the thing. They just wanted to play ninja. I’m a sucker for ninja. I beat everyone my second time around. But we had to learn it! So together we counted the steps, wahed, ithnan, thalatha, arbaa, khamsa… Or around the circle, holding hands, and we’d go wahed… ithnan… wahed… ithnan…. wahed, ithnan… Funny. We could never get the whole thing down unless the word ninja was mentioned.

Playful learning aside, Al-Bustan reminds me of home, which, I suppose was the original mission for young Arab-Americans like myself. It’s never just Arab-Americans, however; there are campers with heritages from around the world and some whose histories lie in mystery. Some who shrug their shoulders when asked where they’re from and say, “Ana min Philadelphia!” (‘I am from Philadelphia’) It’s all great. We all get reminded of our homes, the ways in which culture and language express our lineage and livelihoods.