This Monday we were lucky enough to have storyteller of peace, Nashid Ali, use music and anecdotes to talk about home and identity, specifically focusing on how family plays into those constructions. Amidst his performance he informed us of a dimension of his identity; Nashid is Muslim and can trace his family roots back to the Gullah region of South Carolina and Georgia (Gullah here has nothing to do with the show Gullah Gullah Island, by the way). It should be noted that his knowledge of his ancestors is an extraordinary thing, as the majority of people descended from enslaved Africans were deliberately robbed of that knowledge or simply lost touch as older generations passed away. Additionally, he informed the campers that his Gullah ancestors were Muslim, and had maintained their Muslim practice throughout their time as slaves and, following that, legally oppressed people in North America. 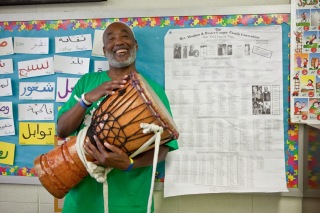 Nashid Ali with his djembe and family lineage. Photo credit to Dana Scherer

The Gullah communities to which our guest alluded existed in Georgia and South Carolina and maintained a polyethnic West African culture that also mixed with some Western European culture. Due to reasons related to climate and disease, the Africans enslaved in the Gullah regions were isolated from white communities and subsequently were able to preserve their culture in ways not afforded to slaves in other areas. Along with music, dress, and language (there is a unique Gullah patois, for instance), they also maintained vernacular West African Islamic practice. It is this Islam to which Nashid alluded when he spoke to the campers.
While Islam’s presence in Gullah communities was remarkable, it was by no means unique in slave communities in North America. As scholar Kambiz GhaneaBassiri explains in his fabulous primer on Islam in the Americas (A History of Islam in North America, 2010), many slaves from West Africa maintained their Islamic identity and practice following their enslavement in North America. As GhaneaBassiri notes, there are records indicating that enslaved Africans continued to practice Islam until at least around the turn of the twentieth century by using written Qur’anic verses from the talisman, as well as memorized ritual practices. And today there are certainly lots of African immigrants, African-Americans, and Black Americans practicing Islam in North America.
I write all of this to say that, with his remarks about his Gullah roots, Nashid subtly provided a narrative for the students at camp regarding how one’s identity is constructed. Whether he was raised Muslim or converted, Nashid connected in a deeper way with both his religion and ethnic roots by discovering his bloodline to Gullah communities. Seeing as our theme at camp is “identity and home,” I think a narrative like this one provided the campers a wonderful example of how someone constructs a part of their identity.
Max Dugan
Kenyon College, ’14
Summer Intern
Advertisement